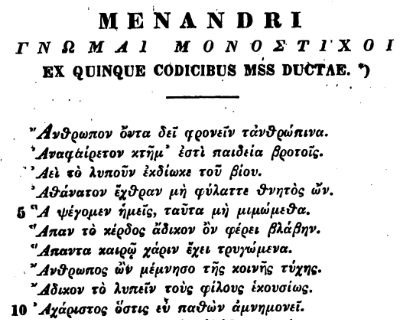 The only English translation is by John Maxwell Edmonds, The Fragments of Attic Comedy After Meineke, Bergk, and Kock, volume IIIb, where he renders the line “Who learns to read doubles his power of sight.” (Though it is not at all what Wittgenstein meant, I am reminded of 5.6 in the Tractatus, “Die Grenzen meiner Sprache bedeuten die Grenzen meiner Welt”—the limits of my language mean the limits of my world.)

The Gnomai represent the genre of the gnomologium, a sort of textbook anthology or chrestomathy of wisdom for rhetorical or moral instruction, especially popular throughout antiquity and the Middle Ages. Erasmus mentions the genre (and cites Menander) in his Adages:

There were those, especially among the Greeks, who willingly undertook the task of making gnomologies, collections of aphorisms, notably Johannes Stobaeus. I would rather praise their work than imitate it.