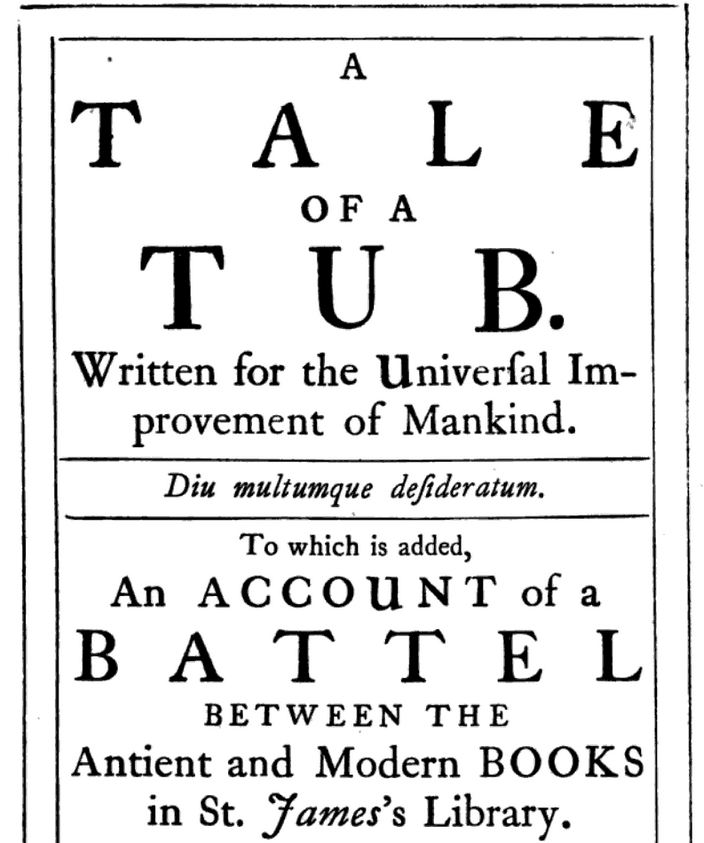 The greatest part of that book was finished above thirteen years since, 1696, which is eight years before it was published. The author was then young, his invention at the height, and his reading fresh in his head. By the assistance of some thinking, and much conversation, he had endeavoured to strip himself of as many real prejudices as he could; I say real ones, because, under the notion of prejudices, he knew to what dangerous heights some men have proceeded. Thus prepared, he thought the numerous and gross corruptions in Religion and Learning might furnish matter for a satire, that would be useful and diverting. He resolved to proceed in a manner that should be altogether new, the world having been already too long nauseated with endless repetitions upon every subject. The abuses in Religion, he proposed to set forth in the Allegory of the Coats and the three Brothers, which was to make up the body of the discourse. Those in learning he chose to introduce by way of digressions. He was then a young gentleman much in the world, and wrote to the taste of those who were like himself; therefore, in order to allure them, he gave a liberty to his pen, which might not suit with maturer years, or graver characters, and which he could have easily corrected with a very few blots, had he been master of his papers, for a year or two before their publication.

Not that he would have governed his judgment by the ill-placed cavils of the sour, the envious, the stupid, and the tasteless, which he mentions with disdain. He acknowledges there are several youthful sallies, which, from the grave and the wise, may deserve a rebuke. But he desires to be answerable no farther than he is guilty, and that his faults may not be multiplied by the ignorant, the unnatural, and uncharitable applications of those who have neither candour to suppose good meanings, nor palate to distinguish true ones. After which, he will forfeit his life, if any one opinion can be fairly deduced from that book, which is contrary to Religion or Morality.

Preceding this is a satirical list of forthcoming works:

Treatises wrote by the same Author, most of them mentioned in the following Discourses; which will be speedily published.

A Character of the Present Set of Wits in the Island.
A panegyrical Essay upon the Number THREE.
A Dissertation upon the principal Productions of Grub-Street.
Lectures upon a Dissection of Human Nature.
A Panegyric upon the World.
An analytical discourse upon Zeal, histori-theophysi-logically considered.
A general History of Ears.
A modest Defense of the Proceedings of the Rabble in all ages.
A Description of the Kingdom of Absurdities.
A Voyage into England, by a Person of Quality in Terra Australis incognita, translated from the Original.
A Critical Essay upon the Art of Canting, philosophically, physically, and musically considered.

And from the long-last opening, after pages of other prefatory material:

WHOEVER hath an Ambition to be heard in a Crowd, must press, and squeeze, and thrust, and climb with indefatigable Pains, till he has exalted himself to a certain Degree of Altitude above them. Now, in all Assemblies, though you wedge them ever so close, we may observe this peculiar Property, that over their Heads there is Room enough, but how to reach it is the difficult Point; it being as hard to get quit of Number, as of Hell.

To this End, the Philosopher’s way in all Ages has been by erecting certain Edifices in the Air; But, whatever Practice and Reputation these kind of Structures have formerly possessed, or may still continue in, not excepting even that of Socrates, when he was suspended in a Basket to help Contemplation, I think, with due Submission, they seem to labour under two Inconveniences. First, That the Foundations being laid too high, they have been often out of Sight, and ever out of Hearing. Secondly, That the Materials, being very transitory, have suffered much from Inclemencies of Air, especially in these North-West regions.