The frontispiece of the first of Pierre Mouchon’s two-volume Table (1780), or index, to the 28 volumes and 5 supplementary volumes of the Encyclopédie originally edited by Diderot and D’Alembert (first edition 1751), engraved by Robert Bénard (whose name appears in the lower righthand corner), with epigraph

(which gives an incorrect citation of Ovid! it should be Ex Ponto III.55) and this inscription:

The “tree” of knowledge in the first edition of 1751 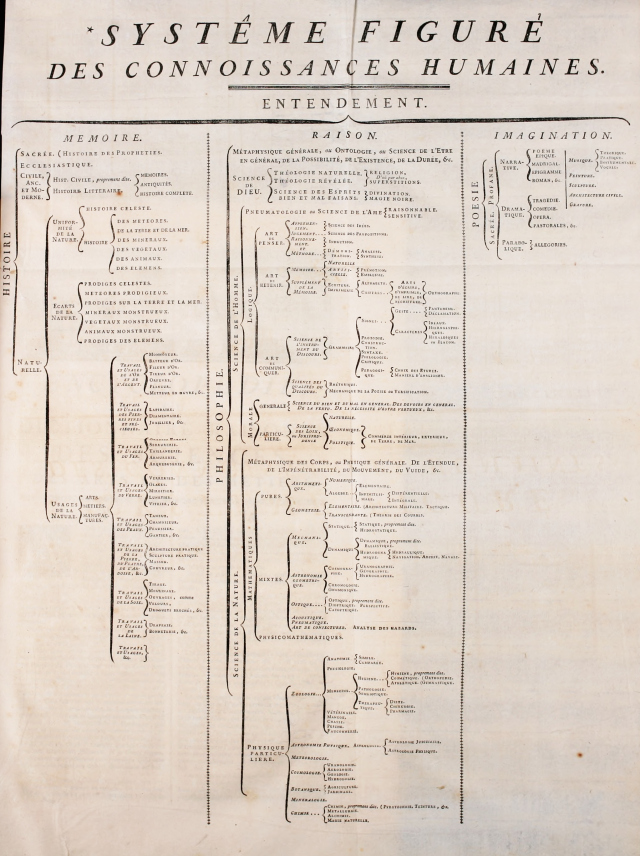 came after the “Preliminary Discourse” (translated into English by Richard N. Schwab), with these remarks:

After reviewing the different parts of our knowledge and the characteristics that distinguish them, it remains for us only to make a genealogical or encyclopedic tree which will gather the various branches of knowledge together under a single point of view and will serve to indicate their origin and their relationships to one another. We will explain in a moment the use to which that tree may be put according to our claims, but the execution itself is not without difficulty. Although the philosophical history we have just given of the origins of our ideas is very useful in facilitating such a work, it should not be thought that the encyclopedic tree ought to be, or even can be, slavishly subject to that history. The general system of the sciences and the arts is a sort of labyrinth, a tortuous road which the intellect enters without quite knowing what direction to take. Impelled, first of all, by its needs and by those of the body to which it is united, the intelligence studies the first objects that present themselves to it. It delves as far as it can into the knowledge of these objects, soon meets difficulties that obstruct it, and whether through hope or even through despair of surmounting them, plunges on to a new route; now it retraces its footsteps, sometimes crosses the first barriers only to meet new ones; and passing rapidly from one object to another, it carries through a sequence of operations on each of them at different intervals, as if by jumps. The discontinuity of these operations is a necessary effect of the very generation of ideas. However philosophic this disorder may be on the part of the soul, an encyclopedic tree which attempted to portray it would be disfigured, indeed utterly destroyed.

Moreover, as we have already shown in the subject of Logic, most of the sciences which we regard as including the basic principles of all the others, and which ought for this reason to occupy the first places in the encyclopedic arrangement, do not have the first places in the genealogical arrangements of ideas because they were not invented first. Indeed, in the beginning we [human beings] of necessity studied individual things. It is only after having considered their particular and palpable properties that we envisaged their general and common properties and created Metaphysics and Geometry by intellectual abstraction. Only after the long usage of the first signs have we perfected the art of these signs to the point of making a science of them. And it is only after a long sequence of operations on the objects of our ideas that, through reflection, we have at length given rules to these operations themselves.

Finally, the system of our knowledge is composed of different branches, several of which have a common point of union. Since it is not possible, starting out from this point, to begin following all the routes simultaneously, it is the nature of the different minds that determines which route is chosen. Rarely does a single mind travel along a large number of these routes at the same time. In the study of Nature, men at first applied themselves, as if in concert, to satisfying the most pressing needs. But when they came to less absolutely necessary knowledge, they were obliged to divide it among themselves, and each one moved forward in almost equal step with the others. Thus several sciences have been contemporaneous, so to speak. But when tracing in historical order the progress of the mind, one can only embrace them successively.

It is not the same with the encyclopedic arrangement of our knowledge. This consists of collecting knowledge into the smallest area possible and of placing the philosopher at a vantage point, so to speak, high above this vast labyrinth, whence he can perceive the principal sciences and the arts simultaneously. From there he can see at a glance the objects of their speculations and the operations which can be made on these objects; he can discern the general branches of human knowledge, the points that separate or unite them; and sometimes he can even glimpse the secrets that relate them to one another. It is a kind of world map which is to show the principal countries, their position and their mutual dependence, the road that leads directly from one to the other. This road is often cut by a thousand obstacles, which are known in each country only to the inhabitants or to travelers, and which cannot be represented except in individual, highly detailed maps. These individual maps will be the different articles of the Encyclopedia and the Tree or Systematic Chart will be its world map.

But as, in the case of the general maps of the globe we inhabit, objects will be near or far and will have different appearances according to the vantage point at which the eye is placed by the geographer constructing the map, likewise the form of the encyclopedic tree will depend on the vantage point one assumes in viewing the universe of letters. Thus one can create as many different systems of human knowledge as there are world maps having different projections, and each one of these systems might even have some particular advantage possessed by none of the others. There are hardly any scholars who do not readily assume that their own science is at the center of all the rest, somewhat in the way that the first men placed themselves at the center of the world, persuaded that the universe was made for them. Viewed with a philosophical eye, the claim of several of these scholars could perhaps be justified by rather good reasons, quite aside from self-esteem.

In any case, of all the encyclopedic trees the one that offered the largest number of connections and relationships among the sciences would doubtless deserve preference. But can one flatter oneself into thinking it has been found? We cannot repeat too often that nature is composed merely of individual things which are the primary object of our sensations and direct perceptions. To be sure, we note in these individual things common properties by which we compare them and dissimilar properties by which we differentiate them. And these properties, designated by abstract names, have led us to form different classes in which these objects have been placed. But often such an object, which because of one or several of its properties has been placed in one class, belongs to another class by virtue of other properties and might have been placed accordingly. Thus, the general division remains of necessity somewhat arbitrary. The most natural arrangement would be the one in which the objects followed one another by imperceptible shadings which serve simultaneously to separate them and to unite them. But the small number of beings known to us does not permit us to indicate these shadings. The universe is but a vast ocean, on the surface of which we perceive a few islands of various sizes, whose connection with the continent is hidden from us.

One could construct the tree of our knowledge by dividing it into natural and revealed knowledge, or useful and pleasing knowledge, or speculative and practical knowledge, or evident, certain, probable, and sensitive knowledge, or knowledge of things and knowledge of signs, and so on into infinity. We have chosen a division which has appeared to us most nearly satisfactory for the encyclopedic arrangement of our knowledge and, at the same time, for its genealogical arrangement. We owe this division to a celebrated author [Bacon] of whom we will speak later in this preface. To be sure, we have thought it necessary to make some changes in his division, of which we will render an account; but we are too aware of the arbitrariness which will always prevail in such a division to believe that our system is the only one or the best. It will be sufficient for us if our work is not entirely disapproved of by men of intelligence. We do not wish to resemble that multitude of naturalists (censured with such good reason by a modern philosopher) whose energies have been ceaselessly devoted to dividing the productions of Nature into genera and species, consuming an amount of time in this labor which would have been employed to much better purpose in the study of those productions themselves. What would be said of an architect, who, having to build an immense edifice, passed his whole life in drawing the plans for it? Or likewise what would we say of an inquisitive person who, proposing to inspect an enormous palace, spent all his time in observing the entryway?

On the Encyclopédie and the encyclopedic tradition, see:

Phillip Blom, Enlightening the World: Encyclopédie, The Book That Changed the Course of History (2005)

Clorinda Donato and Robert M. Maniquis, The Encyclopédie and the Age of Revolution (1992)

Alan Rauch, Useful Knowledge: The Victorians, Morality, and the March of Intellect (2001)

On the tree and other controlling metaphors for organizing knowledge and information, see:

Tore Frängsmyr, ed., The Structure of Knowledge: Classifications of Science and Learning Since the Renaissance (2001)

D.R. Kelley and R.H. Popkin, eds., The Shapes of Knowledge from the Renaissance to the Enlightenment (1991)

Manuel Lima, The Book of Trees: Visualizing Branches of Knowledge (2014)

Manuel Lima, The Book of Circles: Visualizing Spheres of Knowledge (2017)