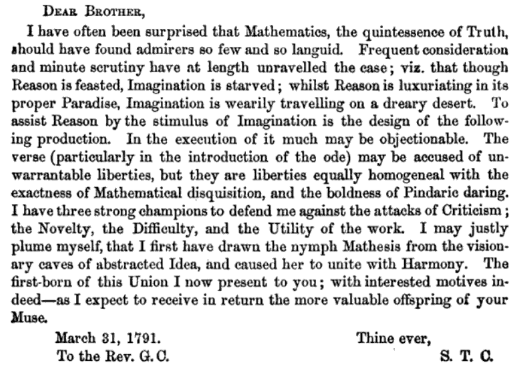 I have often been surprising that Mathematics, the quintessence of Truth, should have found admirers so few and so languid. Frequent consideration and minute scrutiny have at length unravelled the case; viz. that though Reason is feasted, Imagination is starved; whilst Reason is luxuriating in its proper Paradise, Imagination is wearily travelling on a dreary desert. To assist Reason by the stimulus of Imagination is the design of the following production. In the execution of it much may be objectionable. The verse (particularly in the introduction of the ode) may be accused of unwarrantable liberties, but they are liberties equally homogeneal with the exactness of Mathematical disquisition, and the boldness of Pindaric daring. I have three strong champions to defend me against the attacks of Criticism; the Novelty, the Difficulty, and the Utility of the work. I may justly plume myself, that I first have drawn the nymph Mathesis from the visionary caves of abstracted Idea, and caused her to unite with Harmony. The first-born of this Union I now present to you; with interested motived indeed—as I expect to receive in return the more valuable offspring of your Muse.

This is now—this was erst,
Proposition the first—and Problem the first.

From the centre A. at the distance A. B.
Describe the circle B. C. D.
At the distance B. A. from B. the centre
The round A. C. E. to describe boldly venture.
(Third postulate see.)
And from the point C.
In which the circles make a pother
Cutting and slashing one another,
Bid the straight lines a journeying go.
C. A. C. B. those lines will show
To the points, which by A. B. are reckon’d,
And postulate the second
For authority ye know.
A. B. C.
Triumphant shall be
An Equilateral Triangle,
Not Peter Pindar carp, nor Zoilus can wrangle.

Because the point A. is the centre
Of the circular B. C. D.
And because the point B. is the centre
Of the circular A. C. E.
A. C. to A. B. and  B. C. to B. A.
Harmoniously equal must forever stay;
Then C. A. and B. C.
Both extend the kind hand
To the basis A. B,
Unambitiously join’d in Equality’s Band.
But to the same powers, when two powers are equal
My mind forebodes the sequel;
My mind does some celestial impulse teach,
And equalizes each to each.
Thus C. A. with B. C. strikes the same sure alliance.
That C. A. and B. C. had with A. B. before
And in mutual affiance
None attempting to soar
Above another,
The unanimous three
C. A. and B. C. and A. B.
All are equal, each to his brother,
Preserving the balance of power so true:
Ah! the like would the proud Autocratix do!
At taxes impending not Britain would tremble,
Nor Prussia struggle her fear to dissemble;
Nor the Mah’met-sprung wight
The great Mussulman
Would stain his Divan
With Urine the soft-flowing daughter of Fright.

But rein your stallion in, too daring Nine!
Should Empires bloat the scientific line?
Or with dishevell’d hair all madly do ye run
For transport that your task is done?
For done it is—the cause is tried!
And Proposition, gentle maid,
Who soothly ask’d stern Demonstration’s aid,
Has prov’d her right, and A. B. C.
Of angles three
Is shown to be of equal side;
And now our weary stead to rest in fine,
‘Tis raised upon A. B. the straight, the given line.