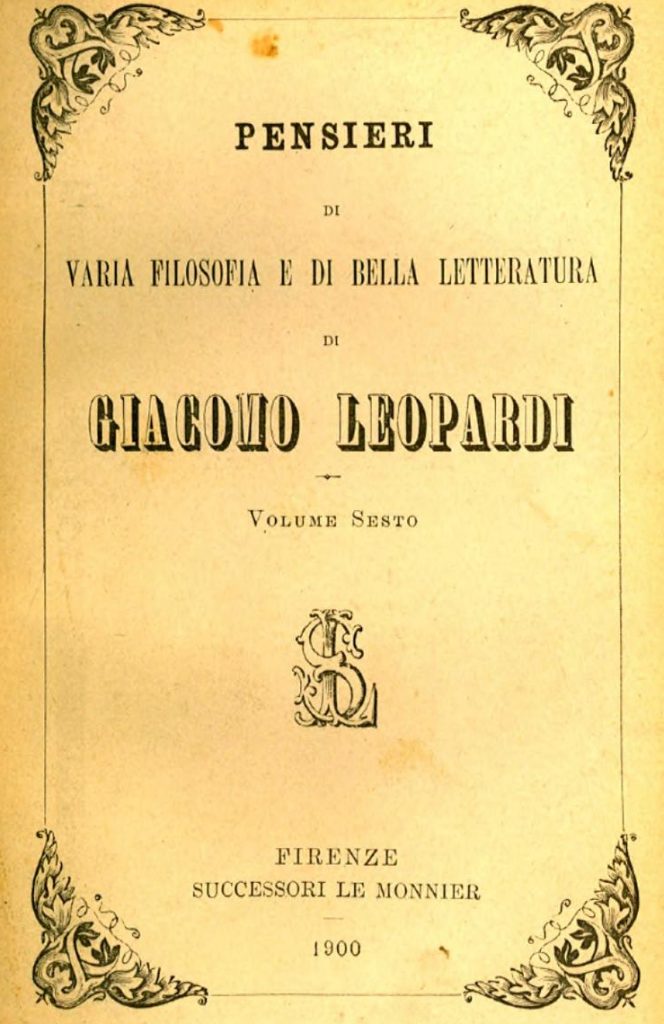 The thirty-second of Leopardi’s Pensieri (Thoughts), written in 1837, translated by J.G. Nichols:

As he advances every day in his practical knowledge of life, a man loses some of that severity which makes it difficult for young people, always looking for perfection, and expecting to find it, and judging everything by that idea of it which they have in their minds, to pardon defects and concede that there is some value in virtues that are poor and inadequate, and in good qualities that are unimportant, when they happen to find them in people. Then, seeing how everything is imperfect, and being convinced that there is nothing better in the world than that small good which they despise, and that practically nothing or no one is truly estimable, little by little, altering their standards and comparing what they come across not with perfection any more, but with reality, they grow accustomed to pardoning freely and valuing every mediocre virtue, every shadow of worth, every least ability that they find. So much so that, ultimately, many things and many people seem to them praiseworthy that at first would have seemed to them scarcely endurable. This goes so far that, whereas initially they hardly had the ability to feel esteem, in the course of time they become almost unable to despise. And this to a greater extent the more intelligent they are. Because in fact to be very contemptuous and discontented, once our first youth is past, is not a good sign, and those who are such cannot, either because of the poverty of their intellects or because they have little experience, have been much acquainted with the world. Or else they are among those fools who despise others because of the great esteem in which they hold themselves. In short, it seems hardly probable, but it is true, and it indicates only the extreme baseness of human affairs to say it, that experience of the world teaches us to appreciate rather than to depreciate.

I think of the opening of Marianne Moore’s poem “Poetry”:

I, too, dislike it: there are things that are important
beyond all this fiddle.
Reading it, however, with a perfect contempt for it,
one discovers that there is in
it after all, a place for the genuine.

The end of the first chapter, “tuning my piano,” of John Barth’s The Floating Opera:

Why The Floating Opera? I could explain until Judgment Day, and still not explain completely. I think that to understand any one thing entirely, no matter how minute, requires the understanding of every other thing in the world. That’s why I throw up my hands sometimes at the  simplest things; it’s also why I don’t mind spending a lifetime getting ready to begin my Inquiry. Well, The Floating Opera. That’s part of the name of a showboat that used to travel around the Virginia and Maryland tidewater areas: Adam’s Original & Unparalleled Floating Opera; Jacob R. Adam, owner and captain; admissions 20, 35, and 50 cents. The Floating Opera was tied up at Long Wharf on the day I changed my mind, in 1937, and some of this book happens aboard it. That’s reason enough for me to use it as a title. But there’s a better reason. It always seemed a fine idea to me to build a showboat with just one big flat open deck on it, and to keep a play going continuously. The boat wouldn’t be moored, but would drift up and down the river on the tide, and the audience would sit along both banks. They could catch whatever part of the plot happened to unfold as the boat floated past, and then they’d have to wait until the tide ran back again to catch another snatch of it, if they still happened to be sitting there. To fill in the gaps they’d have to use their imaginations, or ask more attentive neighbors, or hear the word passed along from upriver or downriver. Most times they wouldn’t understand what was going on at all, or they’d think they knew, when actually they didn’t. Lots of times they’d be able to see the actors, but not hear them. I needn’t explain that that’s how much of life works: our friends float past; we become involved with them; they float on, and we must rely on hearsay or lose track of them completely; they float back again, and we either renew our friendship—catch up to date—or find that they and we don’t comprehend each other any more. And that’s how this book will work, I’m sure. It’s a floating opera, friend, fraught with curiosities, melodrama, spectacle, instruction, and entertainment, but it floats willy-nilly on the tide of my vagrant prose: you’ll catch sight of it, lose it, spy it again; and it may require the best efforts of your attention and imagination—together with some patience, if you’re an average fellow—to keep track of the plot as it sails in and out of view.