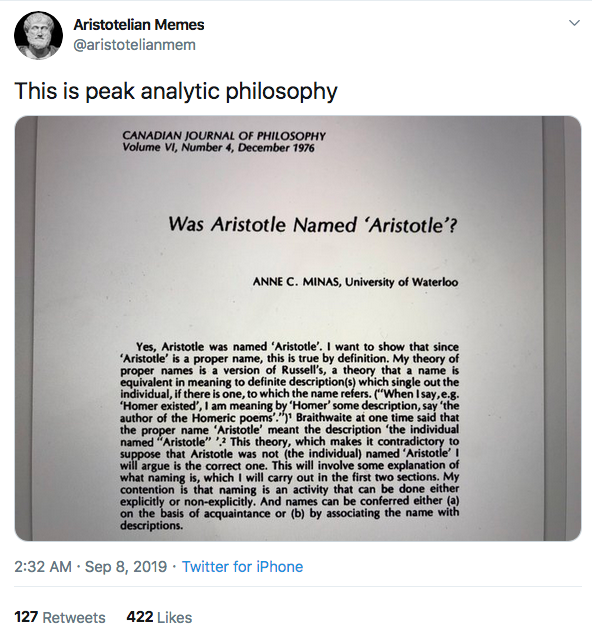 If one was determining the referent of a name like ‘Glunk’ to himself and made the following decision, ‘I shall use the term “Glunk” to refer to the man that I call “Glunk”‘ this would get one nowhere. One had better have some independent determination of the referent of ‘Glunk’. This is a good example of a blatantly circular determination. Actually sentences like ‘Socrates is called “Socrates”‘ are very interesting and one can spend hours talking about their analysis. I actually did, once, do that. I won’t do that now, however, on this occasion. (See how high the seas of language can rise. And at the lowest points too.)

from Kripke, “Outline of a Theory of Truth”:

The versions of the Liar paradox which use empirical predicates already point up one major aspect of the problem: many, probably most, of our ordinary assertions about truth and falsity are liable, if the empirical facts are extremely unfavorable, to exhibit paradoxical features. Consider the ordinary statement, made by Jones:

(1) Most (i.e., a majority) of Nixon’s assertions about Watergate are false.

Clearly, nothing is intrinsically wrong with (1), nor is it ill-formed. Ordinarily the truth value of (1) will be ascertainable through an enumeration of Nixon’s Watergate-related assertions, and an assessment of each for truth or falsity. Suppose, however, that Nixon’s assertions about Watergate are evenly balanced between the true and the false, except for one problematic case,

(2) Everything Jones says about Watergate is true.

Suppose, in addition, that (1) is Jones’s sole assertion about Watergate, or alternatively, that all his Watergate-related assertions except perhaps (1) are true. Then it requires little expertise to show that (1) and (2) are both paradoxical: they are true if and only if they are false.

The example of (1) points up an important lesson: it would be fruitless to look for an intrinsic criterion that will enable us to sieve out—as meaningless, or ill-formed—those sentences which lead to paradox. (1) is, indeed, the paradigm of an ordinary assertion involving the notion of falsity; just such assertions were characteristic of our recent political debate. Yet no syntactic or semantic feature of (1) guarantees that it is unparadoxical. Under the assumptions of the previous paragraph, (1) leads to paradox. Whether such assumptions hold depends on the empirical facts about Nixon’s (and other) utterances, not on anything intrinsic to the syntax and semantics of (1). (Even the subtlest experts may not be able to avoid utterances leading to paradox. It is said that Russell once asked Moore whether he always told the truth, and that he regarded Moore’s negative reply as the sole falsehood Moore had ever produced. Surely no one had a keener nose for paradox than Russell. Yet he apparently failed to realize that if, as he thought, all Moore’s other utterances were true, Moore’s negative reply was not simply false but paradoxical.) The moral: an adequate theory must allow our statements involving the notion of truth to be risky: they risk being paradoxical if the empirical facts are extremely (and unexpectedly) unfavorable. There can be no syntactic or semantic “sieve” that will winnow out the “bad” cases while preserving the “good” ones.

At one time or another, we have all suffered through those unappealable debates in which a lady, with copious interjections and anacolutha, swears that the word luna is more (or less) expressive than the word moon. Apart from the self-evident observation that the monosyllable moon may be more appropriate to represent a very simple object than the disyllabic word luna, nothing can be contributed to such discussions. After the compound words and derivatives have been taken away, all the languages in the world (not excluding Johann Martin Schleyer’s volapük and Peano’s romance-like interlingua) are equally inexpressive. There is no edition of the Royal Spanish Academy Grammar that does not ponder “the envied treasure of picturesque, happy and expressive words in the very rich Spanish language,” but that is merely an uncorroborated boast. Every few years the Royal Academy issues a dictionary to define Spanish expressions. In the universal language conceived by Wilkins around the middle of the seventeenth century each word defines itself. Descartes had already noted in a letter dated November, 1629, that by using the decimal system of numeration we could learn in a single day to name all quantities to infinity, and to write them in a new language, the language of numbers. He also proposed the formation of a similar, general language that would organize and contain all human thought. Around 1664 John Wilkins began to undertake that task.

Wilkins divided the universe into forty categories or classes, which were then subdivisible into differences, subdivisible in turn into species. To each class he assigned a monosyllable of two letters; to each difference, a consonant; to each species, a vowel. For example, de means element; deb, the first of the elements, fire; deba, a portion of the element of fire, a flame. In a similar language invented by Letellier (1850) a means animal; ab, mammalian; abi, herbivorous; abiv, equine; abo, carnivorus; aboj, feline; aboje, cat; etc. In the language of Bonifacio Sotos Ochando ( 1845) imaba means building; imaca, brothel; imafe, hospital; imafo, pesthouse; imari, house; imaru, country estate; imede, pillar; imedo, post; imego, floor; imela, ceiling; imogo, window; bire, bookbinder, birer, to bind books. (I found this in a book published in Buenos Aires in 1886: the Curso de lengua universal by Dr. Pedro Mata.)

The words of John Wilkins’s analytical language are not stupid arbitrary symbols; every letter is meaningful, as the letters of the Holy Scriptures were meaningful for the cabalists. Mauthner observes that children could learn Wilkins’s language without knowing that it was artificial; later, in school, they would discover that it was also a universal key and a secret encyclopedia.

After defining Wilkins’s procedure, one must examine a problem that is impossible or difficult to postpone: the meaning of the fortieth table, on which the language is based. Consider the eighth category, which deals with stones. Wilkins divides them into the following classifications: ordinary (Hint, gravel, slate); intermediate (marble, amber, coral); precious (pearl, opal); transparent (amethyst, sapphire); and insoluble (coal, clay, and arsenic). The ninth category is almost as alarming as the eighth. It reveals that metals can be imperfect (vermilion, quicksilver); artificial (bronze, brass); recremental (filings, rust); and natural (gold, tin, copper). The whale appears in the sixteenth category: it is a viviparous, oblong fish. These ambiguities, redundances, and deficiencies recall those attributed by Dr. Franz Kuhn to a certain Chinese encyclopedia entitled Celestial Emporium of Benevolent Knowledge. On those remote pages it is written that animals are divided into (a) those that belong to the Emperor, (b) embalmed ones, (c) those that are trained, (d) suckling pigs, (e) mermaids, (f) fabulous ones, (g) stray dogs, (h) those that are included in this classification, (i) those that tremble as if they were mad, (j) innumerable ones, (k) those drawn with a very fine camel’s hair brush, (l) others, (m) those that have just broken a flower vase, (n) those that resemble flies from a distance. The Bibliographical Institute of Brussels also resorts to chaos: it has parceled the universe into 1,000 subdivisions: Number 262 corresponds to the Pope; Number 282, to the Roman Catholic Church; Number 263, to the Lord’s Day; Number 268, to Sunday schools; Number 298, to Mormonism; and Number 294, to Brahmanism, Buddhism, Shintoism, and Taoism. It also tolerates heterogeneous subdivisions, for example, Number 179: “Cruelty to animals. Protection of animals. Moral Implications of duelling and suicide. Various vices and defects. Various virtues and qualities.”