A running list of my favorite sets of variations—the obsessional artistic form par excellence—along with some performances that are important to me, in one way or another:

by Ensemble Spirale and Marianne Muller:

by Emil Gilels at the Seattle Opera House:

by Glenn Gould—a highly idiosyncratic recording, the ending all the more dazzling:

by Jorge Bolet and the Royal Concertgebouw:

Bach’s prefatory note to his Inventions and Sinfonias (compiled 1723), the first of which I started learning last Saturday:

by which the amateurs of the keyboard—especially, however, those desirous of learning—are shown a clear way not only (1) to learn to play cleanly in two parts, but also, after further progress, (2) to handle three obbligato parts correctly and well; and along with this not only to obtain good inventions but to develop the same well; above all, however, to achieve a cantabile style in playing and at the same time acquire a strong foretaste of composition.

Anthony Tommasini on some recordings of these pedagogical works:

Virtually every youngster who has taken piano lessons has been taught Bach’s Two-Part Invention in C Major. It’s the first of 15 inventions that Bach composed as instructional pieces for his first-born son, and if the composer’s descendants held the rights to these works they could be living in comfort off the royalties. The C Major Invention, no doubt the world’s most played piece, is ideal for beginners: it lasts less than two minutes (even at a practice room tempo), mostly lies on the white keys and involves just two lines of ambling counterpoint, one per hand. Never is either hand asked to play more than one note at a time.

Given their pedagogical function and wide familiarity, almost no one thinks of programming the inventions for a recital. But several major pianists have recorded them notably, including Walter Gieseking, Glenn Gould and, more recently, Andras Schiff. A new RCA Red Seal recording by Peter Serkin (09026-68594-2) may be the most intriguing of all.

The header “honest method” reminds me of Russell, in the Introduction to Mathematical Philosophy:

The method of “postulating” what we want has many advantages; they are the same as the advantages of theft over honest toil.

Leonard Bernstein’s introduction to Heinrich Gebhard’s The Art of Pedaling (1963):

Reading this beautiful book has been in the nature of a recaptured experience for me—the tenderly nostalgic re-experiencing of an old set of emotions. So clearly does the essence of the Gebhard personality emerge in his writing that it transported me almost physically back into his gracious studio in Brookline, Massachusetts, absorbing again the gentle urging, the massive charm, the malice-free wit, and the overwhelming love for music (romantic as a young lover is romantic) that stamped each piano lesson I had with him as a major event. We would sit at two fine old Mason and Hamlins, abreast: I would play, he would play: he would leap up, with that light, deer-like energy, and over my shoulder coax my Mason and Hamlin to sigh and sing like his. Anything I did that pleased him was magnified into a miracle by his enthusiasms: my failures were minimized and lovingly corrected. And all was bathed in the glow of wonder, of constant astonishment at the golden streams of Chopin, the subtle might of Beethoven, the fevered imaginings of Schumann, and the cooler images of Debussy. But nothing ever became really cool. Sound, in itself, was passion; the disposition of sound into constellations for the piano was life itself. I never once left that studio on my own two feet: I floated out.

During my last year of study with this Delphic fountain, I came upon, and was infatuated with, the Variations by Aaron Copland. A new world of music had opened to me in this work—extreme, prophetic, clangorous, fiercely dissonant, intoxicating. The work was unknown to Heinrich. “Teach it to me,” he said, “and then, by Jove, I’ll teach it back to you.” And that is precisely what happened. Obviously Gebhard’s greatness as a teacher resided mainly in his greatness as a student. Not long before his death he wrote me that he was in the midst of “reviewing” the works of Bach and The Ring of the Nibelungen. By Jove, that was a great man. 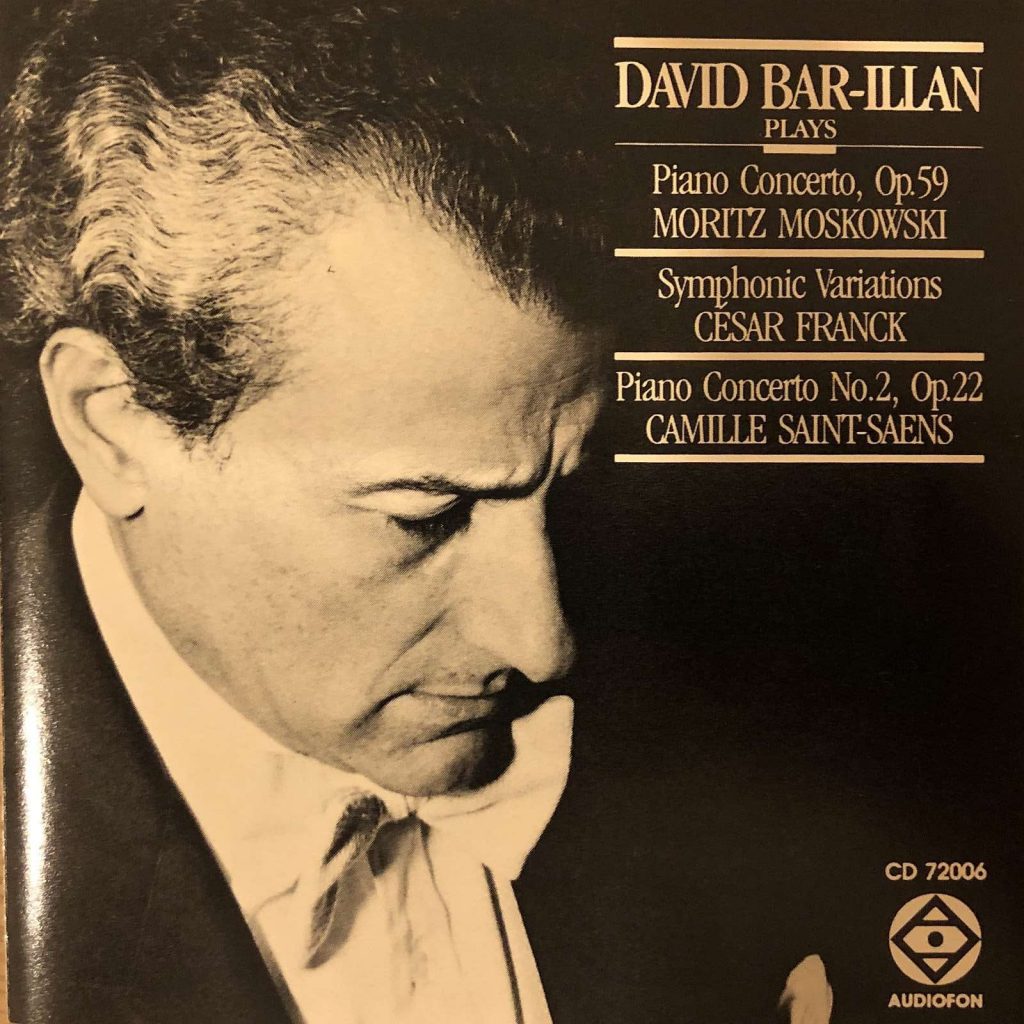 from the liner notes:

Bar-Illan: Because it’s a glittering showpiece, an effective, delightful work and it’s not profound.

A: You mean you play it because it’s not profound?

B-I: That’s right. I think restricting the repertoire to great masterpieces and profound statements is needlessly limiting. Obviously, one should not expect the same kind of musical experience from the Moszkowski concerto as from the “Empreror.”

A: How would you characterize the Moszkowski experience?

A: Why hasn’t it returned to the concert repertoire?

B-I: It may be a manifestation of snobbery, and it may simply be a lack of imagination and boldness in programming. But, most likely, it reflects a change to a more austere, sober musical taste, which started developing after WWII. Whatever the reason, programs are less varied and colorful because of it.

A: Anything we should know about Moszkowski?

B-I: He was a Polish Jew, born in Breslau in 1856, died in Paris in 1925. He was a successful performer and composer whose compositions were in the repertoire of many of his contemporaries, but today, if he is known at all it is for such “encore” pieces as Etincelles, Spanish Dances, and a few superb Etudes. He considered himself Mendelssohn’s musical heir, but his harmonies are richer, his gestures more extravagant and technique more sophisticated. If one must point to a resemblance, I would suggest Saint-Saens, another pianist-composer of the late 19th century who reveled in pianism, and was blissfully oblivious to the advent of modernism.

A: Is that why the Saint-Saens Second is on the same disc?

B-I: I can’t think of two concertos that go better together. Saint-Saens, too, is often criticzed for lacking seriousness and depth. But it is the kind of criticism leveled all too often against all French music, particularly by German critics. From the clavicinists to Francaix and Poulenc, French piano music strove for elegance, clarity, uncomplicated expression, polished technique, clever effects and sensual excitement. It shunned the imposing structures of German music—how many great French sonatas are there?—in favor of epigrammatic ideas and individual, personalized forms more often than not full of joie de vivre.

A: Aside from their French character, is there anything specific these works have in common?

B-I: Both composers obviously knew the works of Chopin, Mendelssohn and Liszt. But the Moszkowski, not surprisingly, contains Slavic elements, while the Saint-Saens, as the late pianist Sigismond Stojowski cleverly remarked, “begins with Bach and ends with Offenbach.” Actually the “Bach” refers only to the opening, while the wit and flair of Offenbach’s music characterizes much of the rest. I believe, though, that neither Saint-Saens nor Moszkowski would have been offended had the Scherzo of the latter’s concerto been described as a direct descendent of the former’s Allegro scherzando.

A: How does the Franck fit into this company?

B-I: Like Saint-Saens, Franck was a great organist, thought not in his class as a piano virtuoso. He was born in Belgium but lived in Paris for fifty years before composing the variations in 1885, a year before Saint-Saens wrote the Second Piano Concerto. He is thoroughly French, but his music could never conjure the “boulevardier” image of the Saint-Saens work. There is a mysticism and melancholy in it that are almost completely absent in the other two concerti and, in fact, in French music in general until Messiaen. Only the jaunty lightness of the Finale, which belies both the composer’s age at the time (63) and the somber character of his earlier music, foreshadows the piano writing of Saint-Saens and Moszkowski.

Paul Badura-Skoda, on a fortepiano built circa 1790:

From “Notes on a Complete Recording of Beethoven’s Piano Works,” included in Music, Sense and Nonsense:

My work on the Beethoven sonatas took five and a half years. One of the crosses the artist has to bear is that the date of a recording is so rarely indicated on the record sleeve. He is all too easily blamed, or, almost worse, praised for interpretations that have lost some of their validity, at least as far as he himself is concerned. People expect an artist to develop, and yet they are only too ready to impale him, like an insect, on one of his renderings. The artist should have the right to identify his work with a certain phase of his development. It is only the continuous renewal of his vision—either in the form of evolution or of rediscovery—that can keep his music-making young.

The recordings of Beethoven’s variation works, with the exception of the Diabelli Variations, were made in three stages between December 1958 and July 1960. There followed, at the turn of 1960–61, the last five sonatas together with the Fantasy Op 77. In March 1962 I played the sonatas Op 31, Nos. 1 and 2, Op. 57 and Op. 90; in June and July of that year all the remaining sonatas between Op. 23 and Op. 81a. The early sonatas from Op. 2 to Op. 14 were recorded in December 1962 and January 1963 (by coincidence my work on the thirty-two sonatas was finished on my thirty-second birthday). Finally in July 1964 I played the miscellaneous  pieces and the greatest of all piano works: the Diabelli Variations.

I recall a cold winter morning in a rather dilapidated Baroque mansion in Vienna; the logs in the fireplace of the hall where we recorded crackled so loudly that we had to throw them out of the window into the snow.